There is certainly a general consensus in the science and industrial communities that CO2 is one of the most inexpensive and renewable carbon resources, not only from green chemistry and environmental aspects, but also from the huge potential of industrial cost-effective resources. Thus, the development of efficient catalytic processes for the utilization of CO2 will have a tremendous direct impact in industrial chemistry. However, given the thermodynamics and kinetics of CO2 catalytic reactions, it is a major challenge in designing, evaluating, and finding more efficient catalysts for CO2 -insertion chemical transformations.
On the other hand, formic acid and CO are two major products from CO2 conversion. However, producing such a cheap chemical feedstock cannot be a practical solution due to the weak economic impact on the current industry. The direct conversion of CO2 into more valuable products such as organic carbonates and isocyanate is, therefore, required. In fact, organic poly- and cyclic-carbonates are widely employed for chemical, industrial, and pharmaceutical applications. According to a recent report, the world market of organic carbonates is estimated to be ~ $10 billion, with production of over 5 million tons per year. At present, 10% of the total products are being made through CO2 conversion. Thus, development of more effective catalysts is essential.
Isocyanate is another attractive chemical because it is a valuable synthetic precursor in polymer chemistry. The global market for 2,4-toluene diisocyanate (TDI) or methylene 4,4’-diphenyl diisocyanide (MDI), accounting for 95% of isocyanate demand, is currently estimated at ~$2.0 billion and still growing due to its high demand as a starting material for various polyurethanes. Due to the usage of highly toxic phosgene and production of corrosive materials such as HCl, alternative synthetic routes for the isocyanate industry are currently under investigation. A new method to accomplish the direct conversion of CO2 into desired isocyanate is currently needed.
Several catalysts, including metal oxides and coordination metal complexes, have been reported for the synthesis of cyclic carbonates by insertion of CO2 with epoxides. While some of these reports have shown good conversion and selectivity, most of the catalysts have at least one or two of the following problems: instability of the catalyst, mass production, expensive solvent and additives, high temperature and pressure, slow reaction kinetics, and reusability. Metal-salen complexes incorporating Cr(III), Co(III), or Al(III) are known to be effective.
Polyoxometalates are also a good candidate because of their catalytic flexibility for various applications. 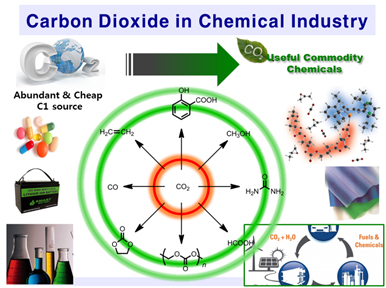